During the past year, our company has been contacted by a number of individuals who are surprised at the weight of our oxygen absorbing packets (OAP’s) compared to absorbers from another supplier.

We have known what the essential problem is for several years but have been reluctant to expose this. It is not completely clear if some of the suppliers are participating in an intentional "subterfuge", which would actually be consumer fraud or if they have been mislead by the technical information as provided by the supplier. 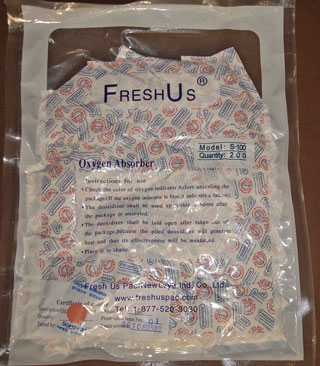 There is one company (from an Asian country and that country is NOT China) that practices a different form of ‘customer education.’ This company prefers to use the number associated with the packet to represent the total air volume. Since oxygen is 20.5% of normal atmosphere, this occasionally leads individuals to believe that what is a 500cc packet is actually a 100cc packet. (Most professionals quickly recognize this because it is detrimental to quality to have a 500cc packet packaged in a bag of 100 [or even 200!!] absorbers.) The nature of the formula within the packet itself is such that such a quantity in a single master bag would on occasion cause a chemical reaction that is bad for packet quality.

What should you do if you believe you have received product that is only one-fifth (1/5!) of what the supplier led you to believe, you would receive?

IMPAK Corporation has decided to share a simple technical methodology and process by which anyone can test the capacity of the oxygen absorbers that they have purchased.

Most, but not all of the packages come with an oxygen indicator. It may be a tablet, a label, or a paper circle. This component will be useful to keep for the experiment. However, they can also be purchased from IMPAK Corporation in packs of 10 via our oxygen indicator tablet webpage.

There are only two items required to do this test, in addition to the oxygen absorbing packet. One is a clean dry 2 liter soda bottle and the other is 4-6 inches of duct tape (or epoxy.)

IMPAK Quality Assurance personnel have devised a simple test method that any consumer can perform on their own. 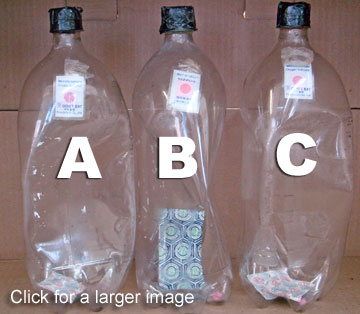 The three soda bottles to the right, are each 2 liter containers. Therefore, each container has 420 cubic centimeters of oxygen. Viewing the containers from left to right, they have been identified as A, B and C.

B  Container B contains one (1) of IMPAK Corporation’s 500cc oxygen absorbers.

IMPAK Q.A personnel used two different types of indicators in each bottle. In the bottom of each bottle are oxygen indicator tablets. If you would like to duplicate this test with oxygen absorbers that you have purchased or perhaps you have a concern that they may be out of date and losing their capacity. See our available oxygen indicators.

At the top of each bottle, what is referred to as the shoulder, we have placed another type of oxygen indicator in order to completely ensure the accuracy of this test.

There are several important points to consider:

IMPAK Q.A. personnel were careful to seal the screw cap tightly and even epoxy underneath the cap. This area represents a possible avenue of slow but steady oxygen ingression. For an ‘at home’ test duct tape would also be effective.

All photos were taken at 48 hours.

All oxygen absorbers produced for commercial food and medical applications contain a "buffer quantity." This buffer quantity is designed to ensure that if the absorbers are left out during lunch by the workforce or inadvertently exposed, or even if they are going into a specific type of medical device or food product that needs 20  40 minutes or more before closing, the absorber will meet its RATED SPECIFICATION.

Therefore, any absorber that is rated at 500cc capacity should easily be able to absorb all of the oxygen in a 2 liter soda bottle.

Container A: This bottle contains a single packet of the "S-100" with the supposed properties of 500cc capacity. As you can see, the sidewalls of this container are pulled in the least of all three. The oxygen indicators in both the bottom of the bottle, where they are quite purple, (see arrow) and the one on the shoulder of the bottle, which is certainly not pink, are indicating that all of the oxygen has yet to be removed from this container.

Container B: In this case, you can see that the tablets in the bottom of the bottle are a clear pink color and the color in the oxygen indicator on the shoulder is the most clearly "pink" of all three bottles. This bottle contains a single genuine 500cc absorber. Therefore, given the buffer factor, this absorber probably has an actual capacity of 620cc  680ccs.

Container C: This is the bottle that had two of the "S-100 packets." As you can see the side walls of the bottle have been pulled in. This is a sign that the absorbers are absorbing oxygen. There are two of the "S-100 absorbers" that are supposedly each capable of a minimum of 500ccs of oxygen absorbing capacity. However, both the upper oxygen indicator and the tablets in the bottom are not the bright pink that is the sign that .1% oxygen or less has been achieved. However, if you look closely at the tablets in the bottom (see picture below marked "photograph A," you will see that the oxygen indicating tablets at the bottom of the bottle are more pink than they are purple.

Those tablets certainly should be pink indicating all oxygen has been absorbed. Two of the "S-100 packets (according to some of the companies selling them)" should be absorbing as much as 1000cc or 250% of the TOTAL oxygen in this bottle.

Thus, the results are as follows:

Container A With only one (S100) oxygen absorber, it is clearly absorbing significantly less than 400cc of oxygen.

Container B Is clearly achieving a level of 0.1% or less oxygen level.

Container C With 2 each of the S-100-supposedly 500cc absorbers would appear to be absorbing very close to 400cc of oxygen and quite possibly the 420 required to actually achieve .1% or less.

You make the decision. This simple test can be performed with regularly available consumer products. The test performed clearly demonstrates that the S100 is capable of absorbing more than 100cc's of oxygen, but certainly not 400cc's, 300 cubic centimeters would be a more "careful" assumption.